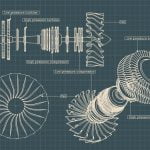 Ammonia is gaining more interest around the world, with especial emphasis on those companies that are now evaluating it as a powering source. In a previous newsletter, we briefly approach the concept and the future scope of some of these sectors, which conceive ammonia as a method of hydrogen distribution with lower risks and better storage economics. However, the question always remains the same – “how far can we go using it?”.

Initial works on the use of ammonia for powering applications goes back to Victorian times, when a small train was designed by Sir Goldsworthy Gurney to compete with coal-based steam trains. Unfortunately, the still inefficient engines, the un-tackled smell and the reluctance from a very profitable coal industry led Sir Gurney to abandon his idea, his “impossible” dream. Decades would pass, and similar attempts for tram applications would be foreseen without major impact until interesting breakthroughs led by human ingenuity combined with social needs brought back the use of ammonia as a fuelling source. This time, the lack of fossils in transport as a consequence of World War II would take Belgium to implement ammonia-fuelled engines in buses. However, similar to Sir Gurney’s issues, the nuisance caused by the improper combustion of ammonia followed the retirement of these buses by the end of the war. However, many lessons had been learnt, knowledge that ensured the study of ammonia as a fuel to support the U.S. army during the 1960’s. Several reports denote how the U.S. army attempted to use ammonia for internal combustion engines as a replacement fuel in case of fossils scarcity, whilst the first aerospace trials using such a molecule initiated.

Not surprisingly, due to the still low efficiencies of jet engines (developed just 15 years ago by then) in an era that was fuelled by recently discovered oil reservoirs, the programs concluded that ammonia was not feasible to replace fossils, relegating the fuel to the production of hydrazine and the “impossible” task of making ammonia competitive enough for the military. However, these initial tests were also a trigger to some engineers that conceived the use of a stable molecule such as ammonia in novel propulsion rocket systems. The age of the X-15 Viking program would follow. Ammonia combined with liquid oxygen would set new records in aerospace development, systems that could reach up to 6.0 Mach number (N.B. Mach number is defined as the ratio of the speed of interest, say the rocket speed, and the speed of sound. Therefore, a 6.0 Mach means 6 times the speed of sound). The record was broken until the development of the Space Shuttle. However, going back into these developments, personnel working on the program can barely trace back the main reason of using ammonia as a fuelling substitute. The topic was left behind, and the natural gas and shale gas revolutions took over, with a profitable fossil market fuelled with cheap, high density resources. 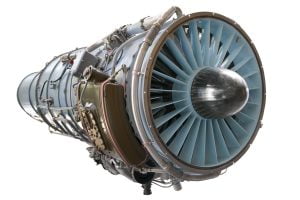 It would be until the beginning of the millennium, when climate change started a scientific and industrial transformation on the use of fossil-based systems, when ammonia would re-appear. The use of coal, oil and natural gas has since then declined in developed economies, and large developing countries such as China and India are in the process of replacing many of their energy needs by the introduction of renewable sources. Although the fossil-based era has not peaked yet, it is clear that the introduction of novel technologies and the use of clean energies will get us to that point by the middle of this century.

On that line of thought, a new fuel will be required, and considering that ammonia can store more hydrogen than the hydrogen molecule itself (as a consequence of having three hydrogen atoms compared to two), the chemical presents a new opportunity to store energy from renewable sources whilst distributing hydrogen at a large, global scale for transportation and propulsion systems.

With the precedent of being able to burn in internal combustion engines, airplanes and rockets, ammonia started gathering attention during the first decade of the twenty first century. Some developments, most around the use of the molecule for furnaces, demonstrated that ammonia could be burned more efficiently than in the past, a consequence of the better use of fluid mechanics, novel materials and better understanding of the fuelling process of these systems. Understanding on the subject of ammonia to power fuel cells also took off, and innovative new materials were conceived to start recovering electric energy in devices capable of using ammonia as a hydrogen carrier.

Further works, starting in this decade, led to the renaissance of internal combustion engines running on ammonia blends. Many were conceived for research purposes, but some others were designed to run trucks and cars in Europe and the U.S. These promising developments would be still haunted by the slip ammonia and the high NOx emission levels coming from the exhaust. However, different to past inventions, these new systems were capable of coping with ammonia-based blends with hydrogen (which would normally be produced in-situ by cracking ammonia), DME, gasoline, diesel, etc. at higher efficiencies, less maintenance and better material compatibility. 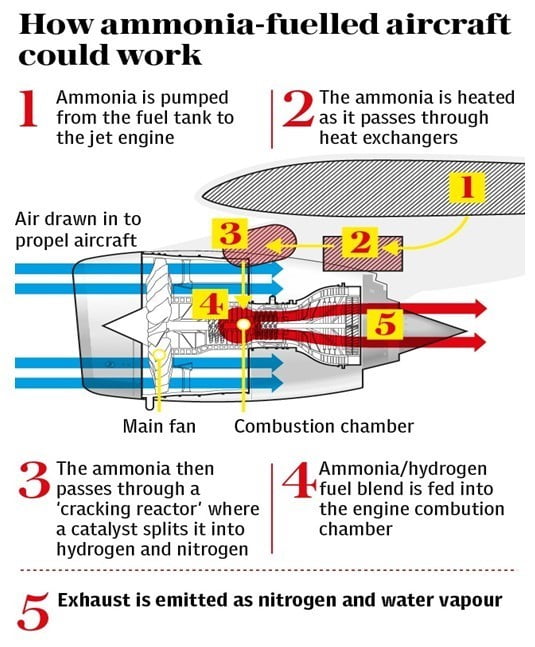 These units set the foundations for the interest of crucial economic areas such as the marine and aerospace sector. Although an entire newsletter can be dedicated to the marine aspect (and it will), aerospace has been slowly regaining its appetite for the use of ammonia from its former rocket-propulsion glory. Recently, a major player in the field, Reaction Engines UK, is now on the traces of making the use of ammonia for propulsion systems a reality. The company lately announced its intentions of using ammonia as an energy carrier for their engines. Their system, which employs hydrogen and enables extremely large cooling ratios, might be the next generation for the use of ammonia in aerospace. The principle of using ammonia will ensure that their world-class heat exchangers use sub-cooled liquid ammonia, whilst new and novel designs will permit the carriage of the molecule in fuselage and other structural components of their jets.

Furthermore, recent talks delivered by several groups, including researchers at the University of Oxford, have proposed that ammonia is a feasible fuel even under the harshest conditions (i.e. a landing crash). In comparison with kerosene, a fuel that would produce a large explosion accompanied by elevated temperatures, ammonia would be in its cooled liquid form, thus retarding the onset of flames, with those generated being of lower temperature than kerosene. There is always the issue of toxicity, a problem that still remains and will be the subject of further research into the development of new materials capable of storing ammonia in a safe manner. Also, the problem of dumping fuel, a common practice in the sector, which can be remediated by heating up the fuel before it is dumped, can be easily accommodated in these new inventions. The lighter density of gaseous ammonia compared to air would always ensure that the molecule will never reach the ground in its liquid form.

Another interesting candidate, already under evaluation in several parts of the world, is the concept of ammonia for fuelling fuel cells in smaller aircrafts and unmanned vehicles. The concept, based on the similitudes of hydrogen fuel cells, can enable the recovery of energy whilst avoiding the reconversion of ammonia into hydrogen, thus ensuring cheaper storage and less inefficiencies in the reconversion process. Although the fuel cells operating on this principle are still under development, it is envisaged that the technology will reach commercial maturity by the middle of this coming decade.

Therefore, considerable ideas and research are now taking place to conceive an aerospace system fuelled with ammonia, from application that are designed for short range trips to those that seek in ammonia a molecule to deliver large energy quantities over long periods and vast distances. The “impossible” might be closer to be resolved sooner rather than later.