This article was first published at Nitrogen and Syngas Conference, 5-8 March 2013, Berlin, Germany

CETEK’S PROPRIETARY HIGH EMISSIVITY COATING TECHNOLOGY
The use of high emissivity ceramic coatings, applied to the refractory surfaces in radiant sections of fired heaters and tubular reformers, was pioneered by Cetek and has now become an accepted means of improving the efficiency of radiant heat transfer, leading to energy savings as well as environmental and reliability benefits. A range of ceramic coatings have been developed and used reliably for many years, for different substrate types, operating environments and targeted application benefits. In fired heaters and tubular reformers, the necessary thermal energy to drive the endothermic processes is provided by burning a fuel/air mixture and transferred to the process by three heat transfer mechanisms: radiation, convection and conduction. The primary means of heat transfer is by radiation.

WHY HIGH EMISSIVITY?
In the radiant section, of tubular reformer, much of the radiant energy from the flame/flue gas is transferred directly to the process/catalyst tubes; however, a significant proportion interacts with the refractory surfaces. The mechanism of this interaction has an appreciable effect on the overall efficiency of radiant heat transfer. A major factor in determining the radiant efficiency is the emissivity of the refractory surface.

At process heater operating temperatures, new ceramic fibre linings, for example, have emissivity values of around 0.4. Insulating fire brick (IFB) and castable materials have emissivity values around 0.6. These materials have been designed with structural considerations and insulating efficiency as the primary requirements. They tend not to handle radiation in the most efficient way. Cetek Ceramic Coatings, however, with emissivity values of above 0.9, have been designed specifically to supplement the radiation characteristics of the refractory surfaces.

It is important to understand how the emissivity property of a surface can affect the efficiency of heat transfer. There are two factors which need to be taken into account. The first is the spectral distribution of the radiation absorbed/emitted from a particular surface and the second is the value of the emissivity of that surface. The amount of heat, Q, radiated from a surface (area, A; temperature, T; emissivity, ε) is given by the following, well-known Stephan Boltzmann equation:

Where σ is the Stephan Boltzmann constant.
Lobo & Evans (1) and others extended the calculation with reference to fired heaters and a simplified equation would appear as:

The effects of maximizing the emissivity ε1 of the enclosure are obvious; there is a significant increase in radiant heat transfer to the tubes. As stated earlier, much of the radiant heat to the tubes travels directly from the flame/flue gas, but the emissive property of the refractory surface has a profound effect. The chart in figure 1 shows the energy spectra for two major components of the combustion products of natural gas; water vapour and carbon dioxide. They are compared with the spectrum of a perfect radiator, or black body, at the same temperature. 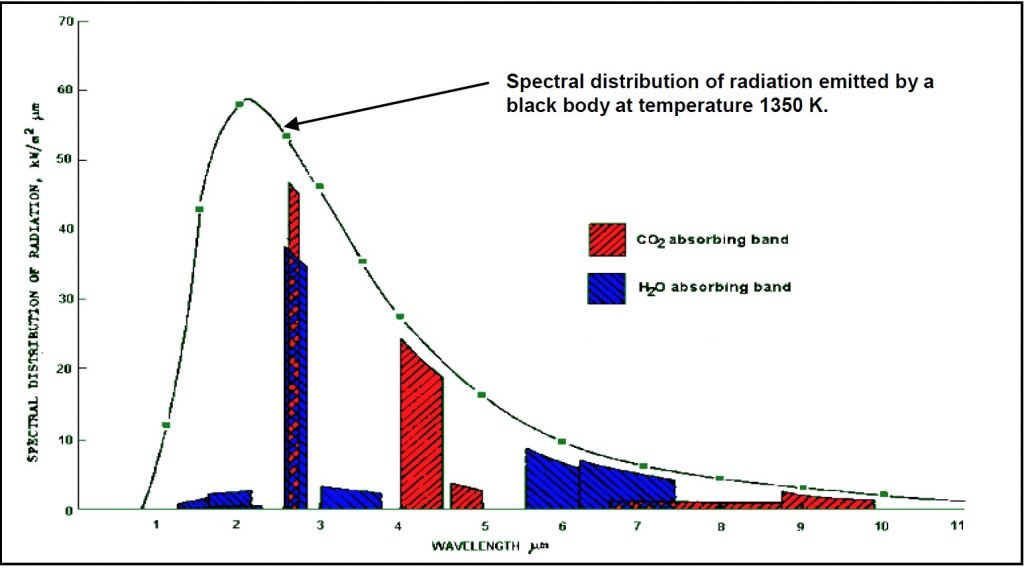 High emissivity surfaces are able to radiate energy across a broad wavelength band lessening the interference of the CO2 and H2O in the flue gas.

When the radiation from a flame strikes a perfect radiator, all of the energy is absorbed, but most importantly, it is transformed into “black body radiation”, as the wide waveband form. As the energy is re-emitted from the surface, it is able to penetrate the atmosphere in the furnace, composed of the combustion products, with little being re-absorbed and taken to the stack by the draft. Therefore it is more readily available to heat the load in the furnace.

The improvement in radiant heat transfer efficiency naturally leads to a reduction in flue gas temperature. This has consequences in the convective heat transfer in both the radiant and convection sections of the fired heater. In the convection section, heat in the flue gas is used to produce steam and preheating of combustion air and often process fluids. The heat transfer/absorbed duty balance should be examined closely to ensure that the balance is not adversely affected. There is also a contribution, though minor, from convective heat transfer in the radiant section, which may be characterized by the following equation:

Where hc, the film heat transfer coefficient, is an empirically derived factor related to the design of the radiant section and the tube configuration.

CETEK’S EVALUATION PROCESS
Cetek’s high emissivity ceramic coatings applied to the refractory surfaces provide a significant effect, which varies for different types and designs of fired heaters, or tubular reformers. In order to derive the most benefit, it is important that a complete technical analysis/evaluation of the effects of the application is completed beforehand. The benefit in the radiant section and the effects on the convection section are studied and reported, before any commitment is made by client, or Cetek.

The life of the coating system applied to refractory surfaces is related to the temperature to which it is subjected and the local environment. Typically in steam methane reformers the coatings will gradually lose emissivity, declining from over 0.9 to around 0.8, after approximately 6 to 8 years. This is still substantially higher than the original, uncoated refractory. At this stage it is recommended to touch-up the coatings to boost the emissivity to the original level and restore performance. The deterioration is caused by high temperature, solid state diffusion of the elements in the coating which provide the high emissivity property. The rate of deterioration may be increased by localized flame impingement.

CO2 emissions are reduced proportionately with the productivity benefits.

Cetek’s ceramic coatings (high emissivity or neutral emissivity) provide a real encapsulation of ceramic fibre (blanket, modules, or panel) insulation. There is no loss of friable fibre from radiant sections and therefore no fouling of radiant section tubes/catalyst tubes, convection section tubes, screens of SCR (Selective Catalytic Reduction) units or loss to the environment, through the stack. Entry to radiant sections during shut downs is less hazardous since negligible contamination results.

CASE STUDY
Incitec Pivot (IPL) operates an Ammonia plant designed by J.F Pritchard, commissioned in 1969, that produces around 890MTPD of Ammonia. The Reformer is a single cell Foster Wheeler design with a straight row of 108 catalyst tubes heated on each side by two decks of 24 up–firing burners. Downstream of the radiant section, is a mixed steam and natural gas (mixed feed) coil in the transition area before the convection section. In the convection section there is auxiliary firing for steam generation, and for superheated steam. Two induced draft blowers draw air locally through the radiant section burners, and convection section burners. The reformer radiant section is a mixture of approximately ¾ castable brick and ¼ ceramic fibre. Typical furnace draft is -0.1in W.G at the arch and stack exit temperature of 193°C (380°F).

In 2008 IPL provided baseline information to Cetek to evaluate the potential benefit of applying the coating in the radiant section. The initial potential benefit, as modelled by Cetek, was a fuel saving of 3.75% to 5% in the radiant section, and a reduction in bridge wall temperature (temperature exit of the radiant section prior to the transition area) of 42°C (75°F) for the same production rate. Alternatively, a similar gain in production was predicted for a constant fuel gas rate. At the IPL plant, the bottleneck for production is normally in the back end of the plant, meaning the target for the project would be in pursuing energy savings not additional production.

The other predicted benefit of the coating was a more even split between the top and bottom burner rows. IPL had been running the reformer with significantly more firing on the bottom row of burners; so that the top row of burners could be turned down in order keep the outlet temperature of the downstream mixed feed coil under its alarm temperature.

IPL investigated the impact of the reduced temperature from the flue gas on the convection section in more detail to determine if there would be any adverse effect on plant operation. This study determined that the existing superheat coil was significantly underperforming.
Replacement of this coil and installation of new brickwork (corbel bricks) would mean the current high rate of auxiliary firing would not be needed and the reduced temperature of the flue gas would not impact superheat temperatures.

IPL was planning on doing significant maintenance work on the reformer in the 2011 shutdown, and this was the next available opportunity to implement the coating. In order to gain more understanding of the practical impacts of the coating, three engineers travelled to Indonesia in 2010 to review two other plants that had also implemented the coating. The feedback from the other plants was positive and as a result of this trip, the project was added to the shut-down scope.

IMPLEMENTATION
The coating was installed by a group of 6 staff after all the other work had been completed in the radiant section. The installation of the coating was not on the critical path for re-commissioning, as other work was still progressing in the convection section. Initially, the reformer was cleaned by wire brushing the castable brick and flattening the ceramic fibre with a nylon brush. 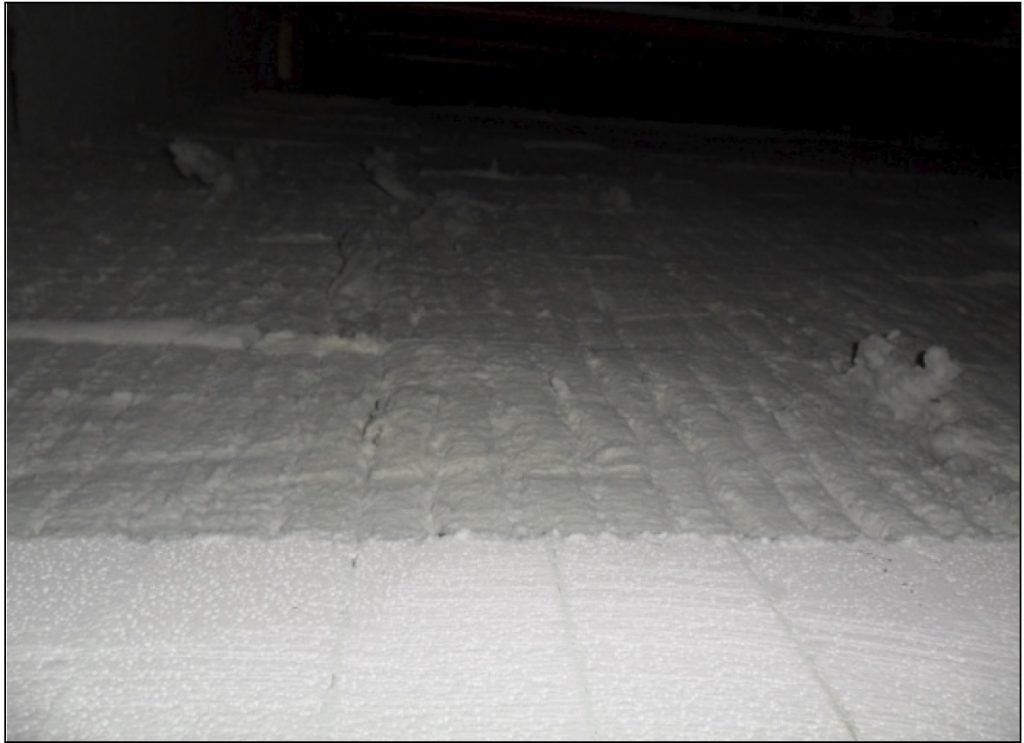 The dust generated from this activity was blown down from the reformer with air. Long plastic sheeting was installed to protect the reformer tubes from any overspray.
The ceramic fibre was applied with a Rigidizer as a base layer and top coated with R371. The castable brick was then coated with a base layer (R360) and a top coat (R370). As the project was not on the critical path, only day work hours were required and the whole process of cleaning the final coat took 3 days. 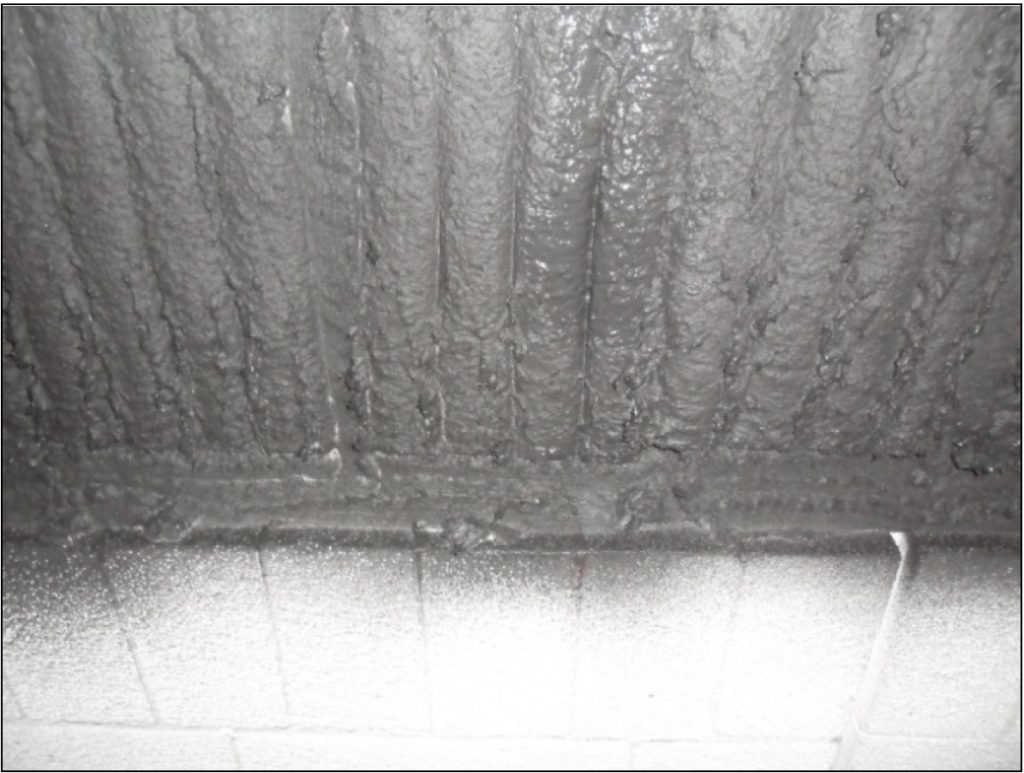 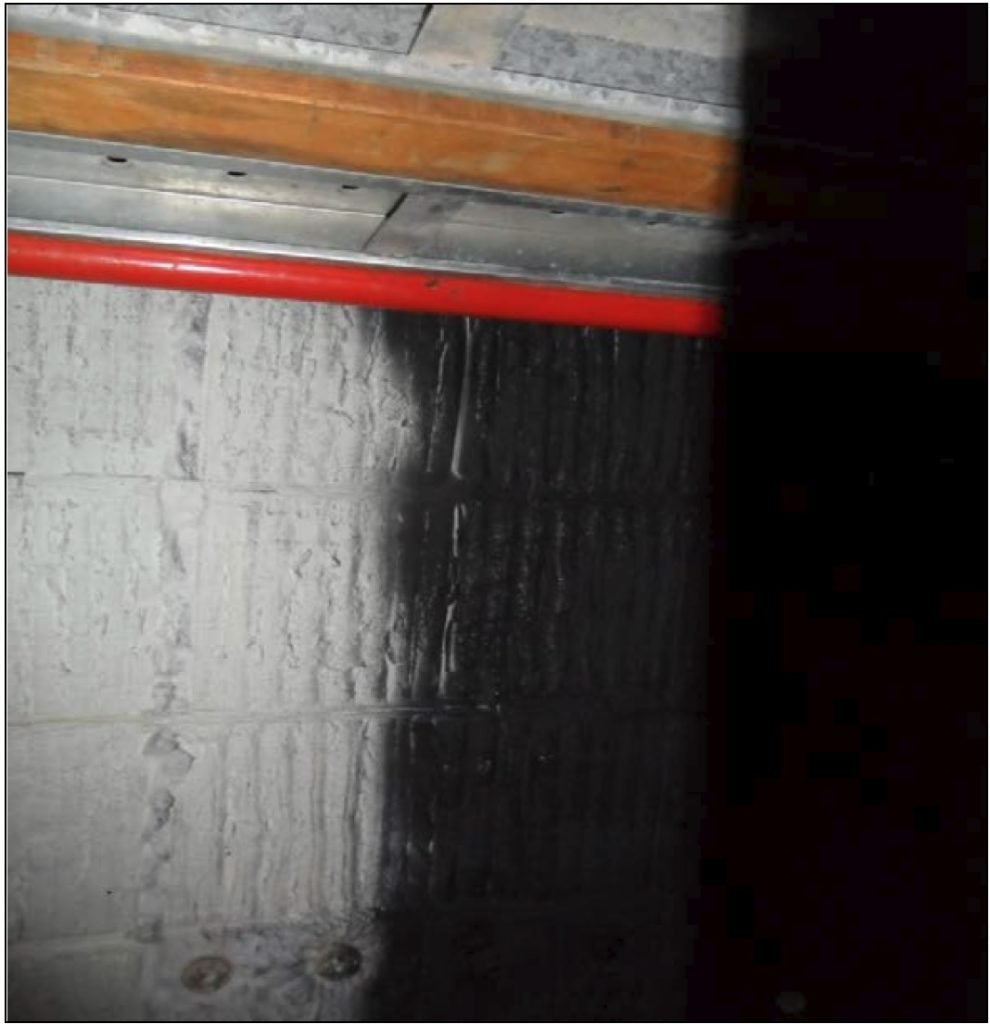 After the plant was restarted, a reduction in natural fuel gas was noticed to the reformer for the same production rate.

This was due to a combination of not having to fire auxiliary burners in the convection section; due to the super heater coil replacement, and also a reduction in radiant section firing due to the Cetek coating. In the radiant section the balance between top and bottom decks was adjusted to increase firing on the top deck, while reducing the firing pressure on the bottom deck. Importantly this increase did not result in higher outlet temperatures of the downstream mixed feed coil, which typically runs close to its alarm temperature.

Comparing a long baseline period before and after the changes were made showed that the overall measured improvement was approximately 600GJ/day for the same production rate. The super heater replacement was typically contributing 250GJ/day, and the Cetek coating 350GJ/day which is approximately 4% saving in fuel gas for the radiant section. The steam generation in the convection section had reduced from 120klb/hr to 100klb/hr. This was due to a combination of reduction in auxiliary firing of superheat burners (which in addition to superheating also raised steam), and reduced flue gas temperature from the radiant section due to Cetek coating. The bridge wall temperature before the mixed feed coil had also reduced by approximately 50°C (90°F) compared to previous operation.