Work Permits and incident case study in the fertilizer industry

Work Permits and incident case study in the fertilizer industry 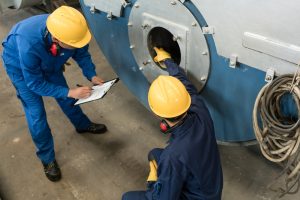 Work permits are absolutely crucial to the safe operation and maintenance of process facilities. They can be divided into three categories: general, hot work and confined space entry. Permits are signed by both the operations and maintenance personnel involved in the work, and by their supervisors. The permit will have the following features:

General work permits are issued for all work that does not involve the use of open flames, hot surfaces, or entry into confined spaces. They cover tasks such as the following:

Before the permit is issued all hazards associated with the work should have been identified, and controls put in place. The person who issues the permit is different from the permit holder. A person cannot issue a permit for themselves because one of the objectives of the system is to make sure that a second, qualified person critically reviews the hazards and the proposed controls.

If a contractor is the permit holder, then the permit should be issued by a qualified person from the host company.

At least two copies of the permit are needed, one to be displayed at the work site, and the other to be held at the issuing point. The copy at the work site should be available for reference at any time by any member of the work team.

The issuance of a general work permit will normally require that the following steps be carried out:

The person in charge of the work reviews the hazards identified in the pre-job plan, and states what safety precautions must be followed during the course of the work. These can include PPE, gas retesting, continuous gas monitoring, spark containment, and the use of fire extinguishers. These conditions are noted on the work permit.

Management approves the permit for a specified time period.

Typically, a work permit is valid for one work crew. At shift change, or at the start of work the next day, the permit must be re-issued.

The permit should specify the action to be taken in the event of:

When events such as these take place, the normal process is to stop the work and to refer the permit back to the permit issuer. He/she will reassess the work and conditions and either re-issue the permit or issue a new or amended permit.

If two or more jobs are being carried out on the same piece of equipment or in the same area the chance for confusion as to which permit applies to which controls arises.

Failure to control multiple permits was a major factor in the Piper Alpha incident – two permits were open on one compressor. When the first job was finished, its permit was closed, and the compressor was started, even though the machine had a missing blind flange associated with the second job.

A display board at the permit issuing point is an effective means of maintaining an overview of all the work under permit control and of the potential interaction between jobs. Such a board also facilitates communication at shift handover.

Hot work involves the use of flame-producing equipment, such as welding or cutting torches, or the use of equipment that can create sparks, such as can occur when metal is being cut or hammered.

Hot work is potentially dangerous for the following reasons:

A Hot Work Permit is needed whenever the work involves open flames, arc welding, electrically sparking equipment or other ignition sources within a predefined distance, such as 15 m, of facilities handling flammable or combustible materials.

A Hot Work Permit includes all the elements of a General Work Permit. In addition, the following checks should be carried out before the permit is issued:

The following questions should be considered as the hot work permit is being prepared:

A confined space is large enough for a person to enter but has limited openings for entry and exit and is not intended for continuous employee occupancy. Confined spaces include, but are not limited to, storage tanks (fixed and floating roof), towers, drums, boilers, furnaces, sewers, ventilation and exhaust ducts, manholes, pipelines, and excavation pits. A person is said to have entered a confined space if they break the plane of the confined space portal with his/her face. Therefore, it is not permissible, for example, to take a breath and to put one’s head into a vessel for a quick look.

Before a person can enter a confined space, conditions such as the following must be met:

The past incidents tell us that there is a big difference between checking a piece of equipment to see if everything is ready or checking it to see if anything can possibly go wrong. The extra amount of time it takes to eliminate every possibility of an accident is a small price to pay to save your people from pain, anxiety, or worse.

Case study (based on a paper presented at AICHE Ammonia Safety symposium in 1974):

The Borger Ammonia Plant had been shut down on the 11th of the month, and the repairs requiring the plant to be shut down had been completed. On the 15th, while the plant was in start-up, two maintenance men were assigned to replace the packing in the steam heated MEA reboiler.

This reboiler has lean MEA on the tube side, with 50 Ib. steam entering the steam chest at the top on the shell side. The condensate line leaves the steam chest near the bottom, rises several feet and passes on to the condensate collection header. The lower portion of the tube bundle has a floating head connection which passes through the steam chest outer bottom head through this afore-mentioned packed joint. The two maintenance men contacted the operations supervisor for a work permit before working on the reboiler.

The inlet steam block valve to this reboiler had been closed at the time of the shut down and all of the condensate valves blocked and the reboiler steam-side drained. The supervisor checked that the steam valve was still closed, and had some operators pull down on the valve to verify that it was closed. The drain was checked and was found to still be open, as was the vent on the steam chest.

The maintenance men donned protective equipment and set up a scaffold so that they could work at the packing gland without any risk of strain or fall.

They loosened the nuts holding the packing gland in place and knocked the gland follower down with a tool. When this happened, about 50 gallons of boiling hot water suddenly rushed out on them, drenching one of them thoroughly and lightly splattering the other one. Both jumped to the ground and nearby workers stripped their clothes off and washed them with cold water. The worker who had received the brunt of the hot water suffered second and third degree burns over his face, upper torso and arms. The other maintenance man was not burned and returned to work. The injured man lost 26 days of work as a result of this accident.

The investigation following the accident revealed that the steam block valve was leaking a small amount of steam, even though it was closed. This leakage was not sufficient to develop any pressure on the steam chest, but did accumulate hot water in the floating head shell immediately above the packing joint, just below the condensate outlet.

The open drain permitted any excess accumulation of water to be drawn off so as to give the appearance that the exchanger was empty. To eliminate this problem, a small drain has been installed on the floating head shell immediately adjacent to the packing joint, so that any water accumulations may be drained before the packing joint is loosened.